Back to knowledge base

Designing experiments is something every researcher does on a daily basis, by carefully considering not only objectives but also experiments carried out previously. Applying statistical and mathematical models to interpret the results is also common practice. But, designing the experiments themselves with statistical models is a rarity.

The benefit of statistical design-of-experiments (DoE) is the acceleration of discoveries by selecting the most appropriate tests, in many cases reducing the number of tests required, and zooming in on the best multi-dimensional space of variables much quicker. In some cases, it can make pursuing a line of research feasible when traditional methods would have entailed a prohibitively large program.

DoE in the research cycle

The picture illustrates how statistical design-of-experimentation contributes to the cycle of research. Clearly, it’s application will impact the way of working. Rather than planning the next experiment on the basis of the results of the previous one, experiments are designed with available knowledge of possible outcomes. By asking questions about the relationship between parameters and performance indicators, and by considering the “feasible” parameter space upfront, key information for process design is incorporated. 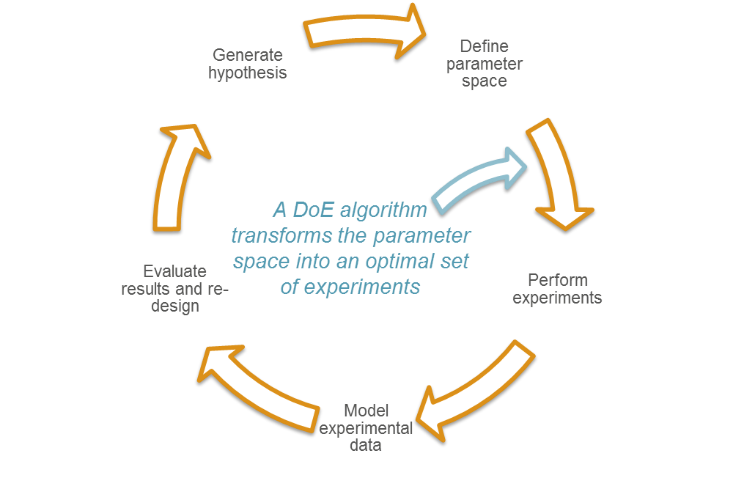 A key factor why statistical design of experiments is being used less than one would expect is a lack of knowledge of key statistical and mathematical concepts needed by the people directly involved in developing a new catalyst or new catalytic process. And yet, catalysis is necessarily a multi-parameter challenge – one which every researcher will recognize – making the potential benefits of a systematic DoE approach very tangible.

From our own experience, we have seen many examples where statistical methods were applied successfully. Even more relevant – we have seen examples in which the problem at hand would probably not have been solved without such a strategy.

Consider the direct oxidation of propane to acrylic acid using a four-component mixed metal oxide catalyst as an example in Fig 1.

This project was brought to us by a client that had already spent several months, unsuccessfully, trying to reproduce the state-of-the-art performance. In this study, we started by attempting to synthesize a number of catalysts based on information in a number of patents. Not surprisingly, performance was underwhelming (the two areas highlighted in orange in Fig.1).

Figure 2: Fractional conversion of propane, and fractional selectivity towards the desired product acrylic acid. Although obvious to the expert – the impact of pretreatment parameters is large, difficult to capture in a single parameter and needs to be dealt with systematically.

It was only after digging deeper in available literature that we identified a large number of parameters in catalyst pretreatment which had a larger than usual impact. A two-tier strategy was applied, in which first all possible parameters associated with pretreatment were tested for significance.

In a second stage, the parameters found significant (in this case, mostly parameters related to drying/calcination rates and temperatures), were optimized further. The result obtained was equivalent to the reference performance (the area highlighted in green in Fig.1).

The right DoE saved over 50% of time and effort

The overall process took less than Save & Exit a month, which is a significant gain compared to multiple months of trial-and-error experimentation in a more traditional method. Statistics and mathematics were key enablers for this accelerated approach.

Scheme 2 shows how this approach significantly reduced the number of experiments to be executed, and saved over 50% of time and effort.

When considering these strategies, it is important to realize each project is unique – the specific research objectives and the complexity of the underlying chemistry determine what is the best strategy. In short, there are no magic bullets: discussion of objectives and results is key to design the right program, and to adjust this design as the amount of data available increases. However, the methodology as such is generally applicable, and can be adapted to fit the needs of your project.

Back to knowledge base